Characters are the lifeblood of your story or novel. No matter how exciting or eventful your plot is, it is the characters with whom readers identify and whose experiences they share vicariously. This does not mean readers have to like your characters – but they do have to believe in them and be interested in their fate.
Are they introverts or extroverts? Assertive, timid or aggressive? Confident or shy? More logical or more emotional?  Optimistic or pessimistic? Adventurous or cautious? Neurotic or well-balanced? What makes them tick and how would they react in different situations, given their history, background, temperament and experiences? Immersing yourself imaginatively in your characters is the only way to build believable human beings who act in consistent ways.

But, of course, real people are not always consistent. So rounded characters also need to be inconsistent, but consistently inconsistent. There needs to be some sort of pattern even in their inconsistent behaviour, and the reader needs to be prepared for it.  So for example, if a character who seems kind and gentle suddenly becomes violent, we need to have had some preparation, however small: a scene of them struggling to suppress their temper; a glimpse of them hammering their fist into the wall, or throwing something across the room, or suppressing a desire to punch someone; or perhaps a sibling mentioning they used to have violent temper tantrums. Or you could do it in reverse; for example, perhaps in your story they have been accused by an ex-partner of violence but we have assumed it was a lie. Now this incident or memory or bit of dialogue could make us think back and wonder.

Unless you are writing an action novel, where most of the interest lies in external events, the plot will be driven by your character’s motivation. As the plot mechanism relies on cause and effect or, in character terms, action and reaction, the character  normally work through this sequence:
emotion > thought > decision > action
This is something you can bear in mind in every scene, although under extreme pressure people sometimes go straight from emotion to action with dramatic consequences.

What drives the plot is the conflict at the heart of your character, the conflict that may have started the novel and that may be exposed by asking the questions: ‘What does s/he desire?’ and ‘What does s/he fear?’ This is the internal conflict, where the character is held back from his or her goal by his or her own fears, insecurities or character flaws. Overcoming these is your character's journey and growth. External conflict may come from outside events in an action novel - e.g. an earthquake, terrorist attack, or from the actions of other characters with conflicting desires and fears. Where the characters' clashing desires intersect can provide turning points for your plot.

Try to keep the characters in each scene to a minimum, especially near the beginning of a story or novel. There is nothing as off-putting to a reader as meeting lots of characters at once and not being able to tell who needs to be remembered and who doesn't. And it’s even more confusing if you keep changing point of view (see POV handout for more on this). Decide who your important characters are right from the start: they are the ones who move the plot. If you have too many characters your plot will become very tangled and complicated and you may have to make constant decisions about whose angle to show the action from, each of which will impact on the way the plot is revealed.

If you really need a large cast, present them slowly. Studies show that short term memory can only cope with around seven items at once, and then only if they are broken into smaller groups that are connected by category – rather like structuring a shopping list around the different areas of the store - vegetables and fruit, milk and dairy, dry goods etc. Rather than introducing all your characters at a party, it can help to introduce them in separate short scenes, preferably in a location where they belong. Their environment will already tell us quite a lot about them. Then give them enough to say or do to give us a sense of their character and what the problem is. Just as in life, we need to be interested enough in them not to forget them so it helps to set up something we want to find out or need an answer to.
Example: (e.g. a middle-class couple and their teenage son and daughter in their country house kitchen). The mother is challenging the boy about his behaviour - oversleeping, not doing his homework, staying out late with his friends - and his father is trying to defend him. The boy's sister seems resentful about all the attention he's getting.  Make sure we can see them and hear them – give us some specific visual cues that you can later use to remind us (e.g. floppy brown hair, an earnest manner, or a habitual gesture like adjusting glasses or nail-biting). Also bring out in dialogue their individual voices by making use of different sentence lengths, verbal tics, teenage expressions, etc.

Maybe in the next scene you have to introduce more characters. Again, try to put them in a context where they belong.
Example: three youths are selling drugs in a squat or hanging out on a street corner. Then the son from the first scene joins them, bringing the two worlds together and casting some light on the family scene in the opening chapter.
As in life, we will forget characters if we meet them once and then don’t see them again for a while, so keep them popping up and remind us who they are by referring to those visual characteristics and their relationships to each other. And give them names that are not easily confused.

When introducing characters, try to do it in a dramatised scene. Don’t tell us everything about their character, background and history – summaries are information, which is hard to retain, especially when it's about characters we don’t know yet. (Think how dull it is when a friend tells you the detailed history of some neighbour of his or hers that you’ve never met.) Find a way to show us by writing a scene in which we can see the character for ourselves. Telling us a character has a bad temper is not as effective as showing her kicking the car so hard she breaks her big toe. Showing us how she behaves and letting us work out that she has a temper will convince us because, as they saying goes ‘seeing is believing’, hence the precept ‘Show, don’t tell.’ If you establish the character through a dramatised scene you may then add a brief summary of any background information about the character, but only information that is relevant to the reader's understanding of the present scene.

A common misconception is that giving thoughts and memories is telling, not showing. In fact thoughts, memories and feelings are an important part of characterisation because they show us what is happening inside the character in the moment. The character’s reactions - internal as well as external - serve as a guide to the reader. We are seeing through the character’s eyes – to all intents and purposes we are being the character - so we need to be shown his or her interior, as well as exterior, reality. And having access to their interior reality enables us to see the difference between what they feel and what they say or do. It enables to see their inconsistencies, their fears and weaknesses, their hidden feelings. It makes them three dimensional and interesting, not predictable. It allows them to surprise you, the reader, and perhaps even themselves. This is the thing a novel or story can do that a play or film cannot - put you inside the character's thoughts and feelings. Make use of it.

The relationships between the characters should play a large part in your plot. Their clashing fears and hopes and desires will create intersections where conflict breaks out and actions are performed. I find that a useful way to keep in mind character's relationships to each other and their potential in every scene, is to take a large sheet of paper and arrange all your characters names on it in a cluster like a mind map. Then link each character to all the others with two arrows, one pointing towards and one away from them. Write along each arrow the character's relationship with and attitude to the other character. This will provide a useful reminder of what you need to develop or reinforce in every scene where those characters appear.
﻿ 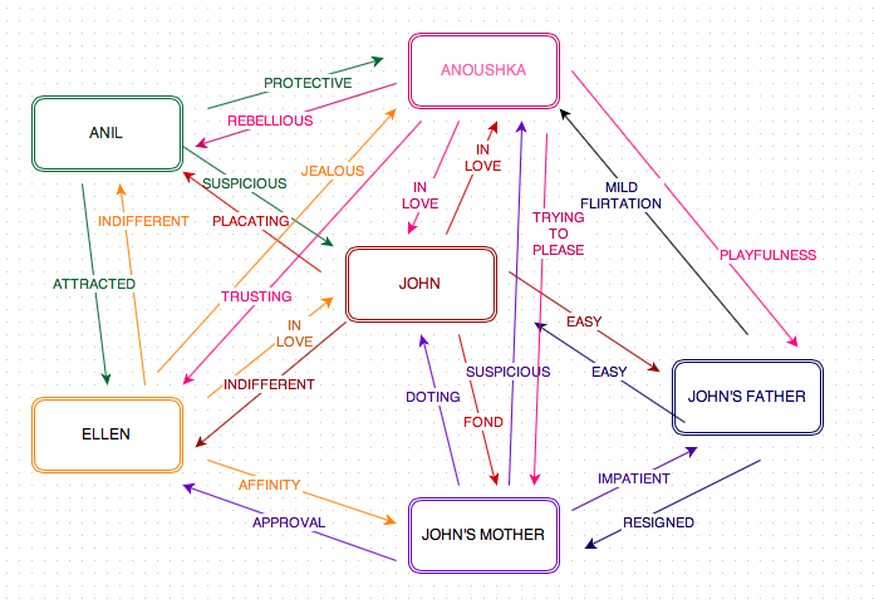